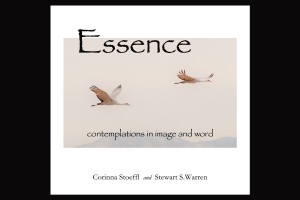 33 couplets of image and poem on facing pages

The online price is $25 which includes S&H

Stewart Warren had seen some of my images and approached me with a suggestion to collaborate on a book, which would have images and poetry in relation to each other. His intention was not to explain the image, rather to complement it. As a start, I gave him a CD with images that I felt would work for the concept we had in mind. It was a fun project on which we worked for about 6 months. A few times, he would send me a poem, asking me to find an image for it. I gave feedback on the feelings his poetry evoked in me or his choice of words. It became a collaboration in the truest sense. In December of 2009, we looked for a way to publish the book and the end of April 2010, we held the first copies in our hands.

The images in the book are all from my work from 2004 to 2009. Besides images from the USA, there are photographs from Israel, Egypt and South Africa.

29 couplets of image and text on facing pages

What kind of world would you like to live in? I invite the reader to delve into that question while exploring the images and the possibilities for a different world that I perceive. What will be your world?

The book is available through online book sellers; Amazon

Here are some reviews for the book

Please log in again. The login page will open in a new tab. After logging in you can close it and return to this page.